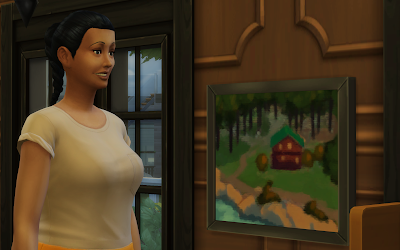 I have been working hard at raising enough simoleons to complete my challenge of becoming a mansion baron.  I feel that the best chance I have is through selling masterpieces.  So I have been focusing most of my time and energy into perfecting my artistic craft.  It is beginning to pay off and I am starting to see various pieces of art work that I felt brave enough to send to an art gallery to be appraised.  They have been deemed masterpieces, which does mean that I can command a higher price for them when selling to collectors but I have to admit that they are not awe inspiring things.

Here are a few of my latest creations. Both Masterpieces in their own right. Both leaving so much lacking, I feel.


Things in my little shack are starting to break down.  I cannot afford the cost of replacing them so I have been attempting to fix them myself.  Luckily I had learned a few things from searching online about mending things when my computer broke down.  Otherwise I would have been forced to replace the thing.

I wish I had taken a note of how much money I was saving with each repair I make.  It might make me feel a little bit better about all the cuts and electric shocks I am receiving as I work.


A flyer dropped (or rather was thrown) into my mail box and it announced the arrival of the 'Bin of the Future'!  This remarkable machine actually paid you money for putting things into it.  I have to admit I was skeptical.  But after reviewing it online and doing some research it appeared that what the flyer was boasting was, in fact, true.

The bin however was not cheap but after some calculations I realised that if I bought the bin, then using the sale of the sink to offset that cost I would be better off simply throwing all my dishes and food into the bin.  In some cases I would recieve more back by simply cooking a large plate of food and just chucking it away.


I have also discovered the world of online gaming.  I first started as a way to relieve the boredom of my isolation and to regain some of my sanity and connection with the real world.

However, I have discovered that gaming could be another avenue to explore in the quest for simoleons.  Tournaments for high class players pay out high value prizes.  I determined to practice whenever I could.

Email ThisBlogThis!Share to TwitterShare to FacebookShare to Pinterest
Labels: Christmas