Chapter 46 - Holiday for a Holiday


The passing of Summer had hit the Bustamante household hard, in particular, obviously, Christmas.  She was now the only non-Bustamante in the place and the feeling of being the 'odd one out' was beginning to weigh on her mind.  She had always been happy to just fade into the background, knowing that her mother, at least, could still see her, but now, she was all alone.

Not that she minded being alone, per se, she had always enjoyed her own company but now the whole situation was just to peculiar.

The Bustamante family came up with a great idea to help take everyone's mind of the tragedies of the past few days.


One morning at breakfast Alex decided that what the whole family, and she was careful to use this word for Christmas' sake, needed a holiday.  She used to go camping in the woods when she was little, with her family.  Although Carson wondered how she knew they were with her.  And she knew just the cabin.  She had wanted to stay in every time she saw it and now they had the means to do so.

Carson called up the booking agent who told them that if they were to arrive that day then he could offer them three days there.  Carson agreed and off they went.

I loved Alex's idea of going on holiday and was so surprised that they had a vacancy just when we needed it.  Although we did have to leave right away, we didn't even bother to pack.  Just jumped in the taxi.

So here we are.  The journey might be all but instantaneous but I still really needed to pee when we got here.  I raced inside to find the loo.  There were four!  My bottom was being spoiled on this trip!

Outside Alex and the boys had found the horseshoes game.  Alex was trying to explain to them how the game is played. Jordon was a little sceptical as to how this could be considered fun,

Alex had to admit that she didn't know, she had never met a Sim who could actually play the game to ask.

That was all Kyle needed to hear.  He decided to become the greatest Horseshoe Player in the world.  Although, without anyone in the group knowing exactly how to play I am unsure as to how he will know when he becomes the greatest player, but he's happy, so.... 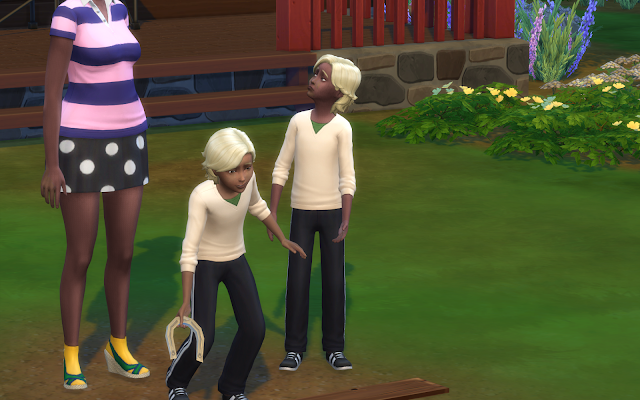 His attempt to become the greatest player ever went on for the rest of the afternoon.  Eventually Alex had to take a nap.  He tried and tried but, like every other Sim in the world, he just couldn't get it.  Jordon just kept watching his brother, It was like Car Crash TV, he said.  He'd never seen anything so awful, or boring, but he just couldn't look away!

I knew what I wanted to get up to and I decided to head out the next morning.  I grab my fishing rod from... and set off down to the beach near the house.  After a couple of hours of peaceful fishing I realised I should be teaching Jordon and Kyle to fish.  That is what Fathers do, teach their boys to fish, shave and balance spoons on their noses.

I tried calling them over but they were to far away to hear me.  If only there was some way we could Get Together.  Then I remembered that there was a way that I could get everyone doing the same thing at the same time.  I wasn't sure exactly how to do it.  But I knew where I could find out.

I hit the forums.


Apparently I had to take action and form a group.  Seems reasonable; I figured I would have to be involved in some kind of action and forming a group seemed logical.  Once I had my group then we could do all sorts of things together....ummm.....Dance..no....Tend Garden...hmm that could be hand...Wait!.. "Fish Together"!  That's exactly what I needed.

Our groups' fishing was a big success.  The boys and I stayed there all afternoon.

Christmas didn't even come out of her room for the first 72 hours.  She is still really sad about her mum.  I know how she feels, I still miss my mum.  I try to comfort her and tell her that she will still see her, from time to time, just like I see my mum, but she said it wasn't the same.


On evening of the second day we decided to make use of the communal BBQ's.  I set out before the others, to bag a table and get something cooking on the grill.  I was still carrying the fish around that I caught yesterday and between you and me it was getting a bit funky.  In fact it wasn't just between you and me I don't think.  People have been giving me funny looks all day, now I know why!

We managed to convince Christmas to come out of her room for the outing but she chose not to sit with us.  Which was handy because these seats only seat four and she was the last one here. 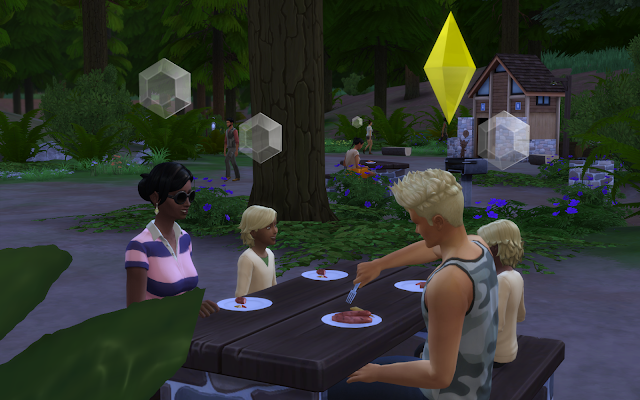 She did come over and join us after dinner when we fired up the campfire.  She seemed to enjoy my singing and stories.  Jordon, less so.  Kyle and Alex soon fell asleep.  It had been a long day, so we decided to head home.

The next morning Easter seemed a lot better.  She came out of her room and joined us downstairs for breakfast.

She got a phone call later that morning that seemed to cheer her up a lot.  Although you couldn't tell from her face.

Over some grilled fruit she told me how excited she had been about getting the phone call this morning.

I asked her about it.

She seemed very excited about it, although I assumed phone calls were common place, but I suppose some people perhaps get less of them than others.

I found it very difficult to understand her, she seemed to be talking crazily.  She seemed to have got a phone call from a plot of her Uncle Lawrence and his shack had died and left herself to it.  She was getting very frustrated with me.

Sometimes I think I am the only sane person in my world.

After our very confusing conversation I took the boys fishing again and Alex decided that Christmas needed to get out and about so she suggested a walk in the woods.

Which, around here, can basically be fulfilled by walking around the house.  Alex meant the deep woods and that involves leaving the campsite.
They had a great time I was quite surprised when Alex returned with a few creepy crawlies that she had caught herself.  With her hates icky things trait this must have been quite a feat for her.

Christmas too said it had given her time to think and she had made up her mind about what she was going to do with her life.