I am getting on a bit.  It's true.  My elder birthday is fast approaching and I am far, far away from my target of making a million simoleons.  To be honest I am nowhere near where I wanted to be at this point.  Even with all these people in the house we still haven't even broken the 200,000 mark.

My contributions are like a fart in the wind.

I decided a night out was in order.  So I hit the local speak easy.

At first I got talking to this guy.  And I am not going to lie.  He was dull.  I longed for Don Lothario.  That's right LONGED!  You heard it here first.  But this bloke was boring.  He was wearing an Angry Crab T-Shirt, I mean who even listens to them anymore?  All he talked about was fish, fishing and how he wished he was fishing.  I began to believe that he was wearing the T-shirt due to his love of crabs, not the band.  Does he even know it is a band?

The worst part was I discovered he was actually an alien, and not in the "where's your Visa" way, in the "I'm from outer space" way.  So, what the heck do I do now!?  If I stop talking to him he'll think I am originist, and I'm not, this guy is so boring that even the fact he is from another planet doesn't balance things!

I managed to excuse myself under the guise of needing the bathroom and slipped outside.  Talking to him had, literally, aged me!  While I wondered what to do the door opened and out strode a short man.  It was the bar tender from upstairs.  I noticed at once his giant hands. We got chatting and he gave me a brief run down of how to make various drinks.  His hands!  They are like flippers!


Even with his strange deformities there was something about him and we really seemed to hit it off.   Somehow we got talking about the newest crazy that is sweeping the sim nation.  BWH or Bush WooHoo.  Apparently all the cool kids are doing it.  WooHooing in public has now been made legal if performed in specific designated bushes.  And, as luck would have it (he said) there had been one delivered just the other day.

It was right over there..


I relented.  He seemed nice enough and after being shown the uninspiring bush I agreed to 'take it for a test rustle'.  Heck, you only live once!


I got thorns in my bum.

In the meantime Summer's job was going well.  For her.  Two people passed away at her work.  She managed to convince death to spare one of them.  Her and Death have that 'thing', y'know, whatever that is.  But he said he couldn't do both, politics or union or some such.

So poor old PC Plod was taken.  But we have no idea why Summer brought home the gravestone.  None.  Whatsoever. 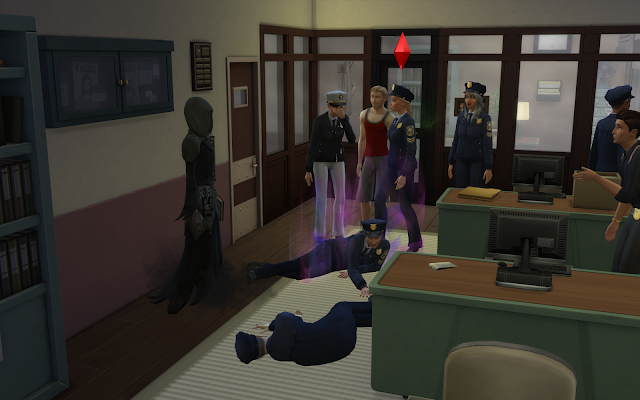